If you've been following my blog for a while, you probably know by now that I often get free product samples from Influenster. My latest voxbox had some exciting new products that I'd never tried before!


One of the products was a shampoo and conditioner sample by Hair Food. This was not a brand I was familiar with, but I enjoyed the sample enough that when I was at Target next I bought this brand. I was using a product that I tried as a sample from a previous voxbox, but conveniently I was almost out of shampoo and Target happened to have the Hair Food products on sale. Perfect timing!


I also received a sample of EatSmart chips, which were really good! I’m not a big fan of really spicy salsa so I usually buy mild. However, in this case the CHIPS had a bit of a kick which was a nice compliment to the mild salsa. I could see them being really good with queso or guacamole as well. I didn’t save any for my brothers since I enjoyed them so much, but I could see them really liking a spicy chip to go with the scorch-your-mouth salsa they like. I’ll probably buy these again in the future, although I haven't noticed them at my grocery store. I'll need to look for them next time I go shopping for groceries. 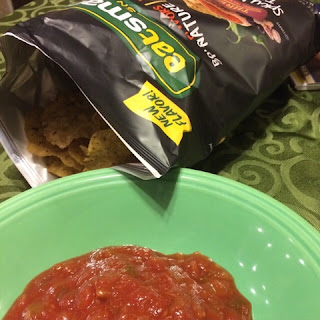 I wasn’t a huge fan of the Curate bar I received, but I’d be willing to try different flavors. I do typically have a granola bar for breakfast during the week, so that’s when I tried this one which was Balsamic Fig and Hazelnut flavor. It was ok, but didn’t make me want to run out and buy a box like I did when I tried a sample of the ? bar from a previous voxbox.


I was somewhat skeptical of the ECOS detergent sample I received, but I was impressed. I usually wash a large load of clothes when I get around to doing laundry, and the sample I received was more than up to the challenge. I’d have to consider the price before deciding whether to buy this in the future, but if it’s comparable to other detergents on the market I would definitely use this product again!


Generally, protein drinks aren’t my thing. However, I tried the Orgain sample I received and enjoyed it! I mixed it up in the blender with a banana, berries, ice, and some milk so it was a bit like a smoothie. I probably won't start buying it since I don't typically drink these, but it was nice for an afternoon snack.
at 7:52 PM No comments:

Influenster sent me products from one of my favorite companies in my most recent Voxbox! I got St. Ives new Oatmeal Scrub, Even and Bright Pink Lemon and Mandarin Exfoliating Body Wash, and Refresh and Revive Pear Nectar and Soy Body Lotion. 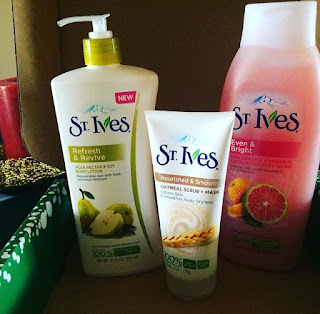 I've used St. Ives off and on for years (I love their Apricot Scrub), so I was excited to give these products a try!

I love the Oatmeal Scrub. One thing I've loved about St. Ives' Apricot Scrub is how smooth my skin feels after using it, without feeling dried out. The Oatmeal Scrub has similar results. The exfoliation isn't as harsh and the product is creamier, leaving your skin feeling moisturized.

Even and Bright Exfoliating Body Wash

The Pink Lemon and Mandarin scent is amazing. I also loved how my skin felt silky after using the body wash. My only problem is I don't really use body wash very often, I prefer bar soap. So despite using this a couple of times, I haven't enjoyed it as much as the Oatmeal Scrub.

I also really enjoyed the Pear Nectar and Soy scent. That said, this lotion doesn't cut it for my skin during the winter. Heaters really dry my skin out and I need something that really moisturizes to keep up. However, I'm looking forward to trying this again this summer. Both the scent and the consistency of the lotion should be perfect once the heaters are off and my skin isn't so dry. I'm considering taking it to the office to share with my co-workers!

What are your favorite skincare products?
at 1:18 AM 1 comment:

I recently received an Influenster Voxbox with Sally Hansen's Airbrush Legs cream. I was a bit suspicious of the product having never used anything like self-tanners or similar products, but with law school starting I had several events where smooth, flawless legs would be a nice perk.

I applied the cream on Saturday evening before going to a mixer at a upscale bar downtown. I wore light-colored capris and it was already evening, so I'm not sure the difference was that noticeable. I wasn't sure I liked the product (it felt like it left a light residue on my skin), but I definitely noticed the difference when I applied it. When I got home I was also impressed to see that the product had not rubbed off onto my pants.

The package directions said to apply the cream (lightly near knees and ankles) and let set before dressing. My first leg was dry before I even finished with the second, but I gave it another couple of minutes before dressing. According to the package the color comes off with soap and water, but since I had another event Sunday afternoon I decided to see how well the product would hold up overnight.

On Sunday I wore a skirt to the reception I had in the afternoon. Since the product didn't rub off or smear overnight I didn't reapply the cream. At the reception I was sitting and talking with a friend and she asked if I was wearing hose! That's pretty impressive.

I did wash the product off after the reception and it came off fairly easy with soap. Overall I'd say this is a great option if you need something to smooth out your skin for an event, but aren't willing to commit to hose. I'm not sure I'm worried enough about my legs looking "airbrushed" to go buy this product, but it works great.

The only other thing I would say is that I didn't worry overly much about blending the cream above my hemline, but if you had seen my thighs the difference between "airbrushed" and natural skin was obvious. If you're planning on wearing this with a bathing suit or want to create a more gradual transition from the cream to your natural skin color you may need to stop closer to your panty line rather than mid-thigh like I did.
at 2:02 PM 1 comment: